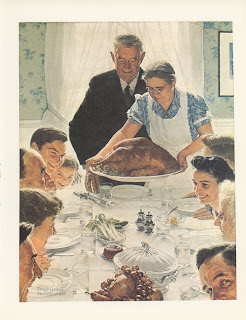 What?  Exactly.  I don't even like turkey.  I always pass it up in favour of the ham at Christmas.  Which is why there is an extremely large turkey still frozen in my refrigerator as of this very moment.  Every year, I volunteer at People's Congregation Church in upper northwest D.C. handing out food baskets at Thanksgiving and Christmas.  My former bosslady (and awesome friend) Carol invited me three years ago (her mother, Shirley, runs the show) and I've been coming back for more ever since.  I've even made some church friends (heyyyyy, Gloria).  It's like an episode of Amen.  Everyone at Peoples is so friendly and welcoming that you can't really say "mm, no thanks, I'm not a fan of turkey" when they offer one to you.  Especially when Shirley is doing the offering.  You just humbly accept, bow your head and keep it moving.  I mean, who says no to a 20 pound bird?  Don't answer that.  So ever since Christmas, my gifted twenty pounder has been hanging out in my freezer.  My very very small freezer.  Well, it's time I freed up some space, so guess what this post is about?
The 5 days of turkey.  Fuuuuuuuuuuck.  I don't take kindly to leftovers, so I can't imagine what I'll do with leftovers of a food I don't really like in the first place.  So I'm going to knock it out with one shot.  5 dishes out of one turkey.  Whatchasay??? 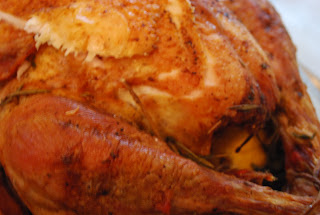 Monday:
A roast turkey is a cliche.  When you picture the white picket fence, the perfect 50s American family, they always seem to be serving up a turkey.  It's always perfectly trussed and perfectly golden.  It's always served along side that freaky green bean casserole which I've honestly never had.  I've never been to Olive Garden either, so there.  There are always leftovers (presumably not of the green bean casserole) in the fridge that get the inevitable pick.  I'm going to let you in on a weird but factual dish I totally enjoy.  It's completely gross, but it's the first thing I make from a lovely roast chicken.  In this case, a lovely roast turkey.  Sliced meat and mayonnaise.  I hit that straight, but if you need a slice of whole grain bread, have at it.  I know.  It's bad.  Almost as bad as my other secret obsession, pork rinds and champagne.  Hold the judgement, please and thank you. 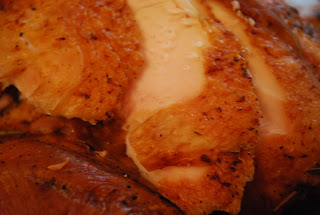 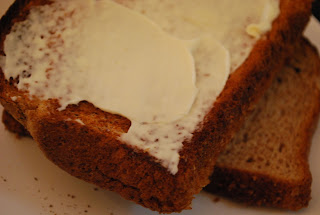 Tuesday:
Moving right along, after I've had my fill of fatty goo on protein, I set my sights on getting the turkey off the bone.  Makes it much easier to work with.  Next up was a delicious croquette that I served up with a strawberry vinaigrette and spicy arugula.  Whip up the croquette like you would if it were salmon.  An egg, onions, parsley, scallions, breadcrumbs, yadda yadda yadda.  Brown them in a bit of olive oil and you're done.  For the vinaigrette, combine a bit of strawberry preserve and apple cider vinegar.  Slowly drizzle in olive oil until it's a light feathery consistency.  Drizzle over the croquette and arugula.  This pretty much adds the fat to this dish, so if you want to cut a good 14g of fat off this, forgo the vinaigrette and just use a bit of strawberry preserve for garnish.  It's delicious y'all and I'm going to go ahead and put my name on this combo even if I'm not the first one to come up with it.  La vinaigrette de fraise de Devrouax.  So simple, so incredible. 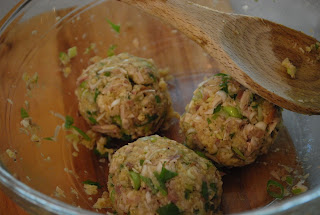 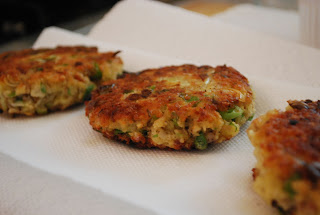 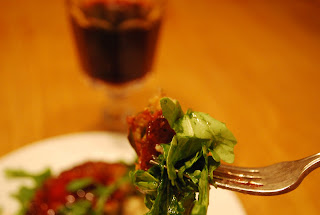 Wednesday:
Have a good bit of shredded turkey to handle, so I put to use that last lone package of taco seasoning and guess what?  You guys are so smart.  It's a basic setup here.  Sautee the turkey with onion and taco seasoning and dress it up however you like.  I have absolutely no imagination today, and no ingredients, so my tacos are an interesting breed.  Apparently, I'd forgotten about that cheddar hiding in the back of my refrigerator, so in the trash it went (it's so sad, so sad to waste food).  Replacement?  Parmesan.  I know.  Hmmm, romaine?  Not today, darlings... today it's arugula (it's *shocker* left over from the croquettes).  Yes, lovelies, we're making that stretch (it will be the accompaniment to an egg salad sandwich later this week for lunch).  I did have a tomato, so there it was... the most international taco on the planet.  I made three and still had filling left over, so guess who brought nachos to the neighbors?  You guys are so SMART! 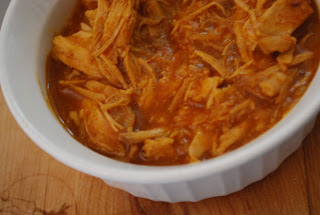 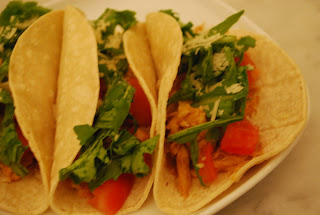 The Deal:
Calories: 331; Fat: 10g; Carbs: 16g; Protein: 39g
Thursday:
Feeling like I need a hug today, so let's put aside the "skinny" in our bitch and rock out some comfort food.  Moderation, moderation, and I just can't resist (tastebuds were GIDDY).  Turkey Pot Pie!  I don't believe in substitutions (low fat, non fat whatevers with chemical substitutes do not interest me at all), so we're going to use the pastry, flat out.  I just won't use as much as I'd like.  I would normally try to get around this, try to find a delicious alternative to flaky, golden, buttery crust.  But it's similar to finding a substitute for a roux or vegan bacon.  The choices just pale in comparison to the real thing.  I'm taking the easy way out.  Did I mention that when Shirley tossed the turkey my way, she also gave up canned goods, jiffy cornbread mix, margarine and hot dogs?  Sure did!  I used the mixed vegetables in a can for the veggies in the pie.  It was very easy.  Make a roux (butter and flour until it's even and frothy) then add the can of mixed vegetables.  I can't believe I actually went the Sandy Lee route, but there it is... I see why she's adamant about cocktail time.  Add chicken stock and let thicken until it's that classic pot pie consistency.  Top with rolled out pastry (I like Dufour) and bake at 375 degrees until golden.  Enjoy each and every bite, but for God's sake people, don't devour the whole thing... then promise 50 extra situps tomorrow. 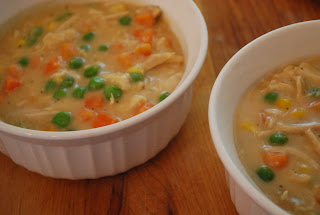 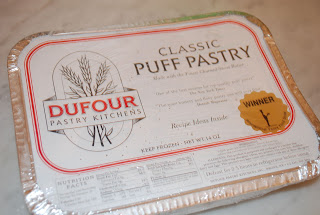 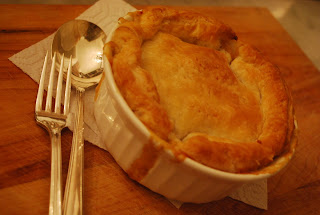 Friday:
Last day of turkey.  Kind of glad, I must admit.  It's all starting to taste the same.  I said it once and I'll say it again.  Not the biggest fan of turkey.  So I'm going to put on my big girl pants and make a dish my mom used to make for me as a kid.  It ensured I ate my peas and my mushrooms.  Chicken Turkey a la King.  The original recipe does not call for peas, but I dig on peas, rice, and chicken.  It always does right by me.  I'm going to be a magician (read: lazy cheater) and use the pot pie filling for the a la King.  Abracadabra!  It's magic!  It's a little rainy out, a little cool with a nice breeze.... perfect for a little Mommy love.... 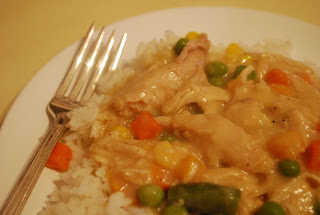