A Week Without Waste: Day Three 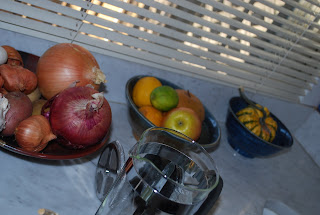 So, where were we?  The turnip salad was fantastic (big up Bren), I hope you thought so too, so let's have a look at our list now:
mustard greens
romaine leaves
acorn squash
turnips
red potatoes
yukon gold potatoes
pink lady apples
spring onions
eggs
ground buffalo
bacon
milk
yogurt

So, as you know (I think), I'm delightfully employed at the Smithsonian Institution.  Established for the increase and diffusion of knowledge.  Don't you love how broad that is?  Translation: I sit around and think up ways to educate the general public at the National Museum of the American Indian.  In a fun, fantastic and fabulous manner, of course.  Since working here, I have been obsessed with the culinary history of various indigenous nations and have learned more about salmon than I ever thought possible.  Including how to fillet it, dress it with juniper, and roast it on a spit in an open fire.  I'll share one of these days, I promise.  Buffalo is very prevalent in Indian Country and within, you'll find it on many a menu.  Our version is actually bison, and not a buffalo at all, but we all just call it buffalo, like the boring, grey, upstate New York city (no offense to you all up north, but it's true).  Bison was hunted by plains natives (notably the Blackfoot, Cheyenne, and Comanche) and provided a map of sorts for the nomadic tribes.  It went through a period where it was endangered; thankfully, that is no longer.  Buffalo meat is dramatically lower in fat than beef and is higher in protein making it a pretty good substitute. After this recipe, I might add that I do believe I prefer bison to beef.  Figuratively, it's sweeter.

That being said, I have to tell you that I love a good burger.  Who doesn't?  If you're American, chances are you dig on a good, classic burger once in a while, it's a staple.  It's like apple pie.  On the Food Network, they devote entire shows to this favourite.  So instead of making up something totally innovative (frankly, I'm lazy today), I just went with sliders.  Easy to dress up and guaranteed delicious (kind of like Gabriel Aubry, whoop whoop!!).

OK, so speaking of being lazy, this afternoon after work, I was so intent on picking up a copy of The Girl With The Dragon Tattoo, by the time I got home from the bookstore, I had forgotten all about my intended market trip for burger necessities.... you know, like buns?  But isn't the point of this whole series to use what I've got?  The Week Without Waste (and unnecessary trips to Whole Foods). So check it.  This is what I had to work with.  English muffins and random cheese from the leftover scrapbin called Herve Mons Tomme Des Bois Something (not only a cheese, apparently, but the name of an old beau to boot).  Staple extras filled in the rest; an onion and a few garlic cloves.  That's all I really needed.


This is one time that I'm going to willingly and knowingly veer off the skinny little bitch path because it's SO WORTH IT!  This burger is the bomb. 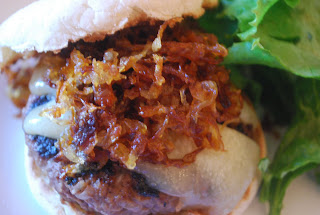 Finely chop half of a medium sized onion and a couple of garlic cloves.  Season (all I used was sea salt and white pepper) and sautee in olive oil until soft.  Let the onions cool a bit then add to a half pound of ground bison.   Gently fold it in evenly and form 3 patties.

Slice the remaining half onion and sautee with a blend of olive oil and white truffle oil (see what I'm talking about?  score!  I had it in my pantry *dusting off my shoulder*) until golden brown.


Grill the burgers wherever you prefer, whether inside or out (if I weren't so lazy that day, I would have grilled outside, but oh well... next time), slice the cheese and let it melt on top.  Herve turned out to have a very stinky rind with a very mild flavour.  He was perfect.