Where is a slice just a slice? 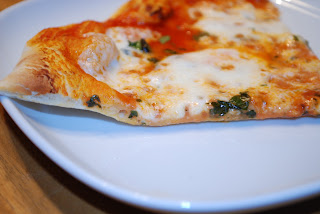 So, I think that one of the things I miss most about New York City is the water. Seriously. Firstof all, it's one of the cleanest in the country. It was never too harsh for my face and I had no qualms about drinking it straight from the tap if I woke up parched in the middle of the night. Also, as I think all are aware, it is THE reason why NYC has the best bagels and pizza dough. Not sure what the reason is, but NYC tap water produces some of the best food around. That being said, the single thing I really miss about NYC is the pizza. It's the best. Hands down. Now, I've never been to Naples, so I can't say for sure that a Manhattan slice doesn't outrank the original Neapolitan slice, but I would probably bet that it could hold it's own in comparison.
Since I've moved to DC, I have missed that single slice I'd pick up on the way home from work, on my lunch break, on a weekend walk, or anytime I was craving perfect crust, delicate sauce and yummy, gooey, mozzarella cheese. I've missed the anticipation of a freshly baked pie, just for me, right out of the oven, then right at my door. When I first got here and my friends would order pizza, I'd opt for wings. I don't like wings. There are a few places in DC that serve up a decent New York or New Jersey slice, but they are far and in between. My test? I order a slice. If they know that what I want is plain slice of cheese, they probably know what they're doing. Or at least they are from New York. Mama Lucia serves a good slice, but eat it hot, it doesn't bear well an hour later. They won't move into DC, they say the rents are too high, so I'm stuck driving out to Silver Spring if I'm jonesing. There is also the phenomenon of Two Amy's which I find overdone and overrated. Not to mention there are always children running rampant in there. No matter what time you go. It's like Children of the Corn, those kids rule without a parent in sight. You'll get a better pie and a cooler atmosphere for what it is at Pizza Paradiso, but that's just my opinion. Less pretense, less daycare. Since I refuse to drive out to Virginia for an authentic New York slice (this is a rumor, I've never actually visited Tony's Pizza in Fairfax, but it's supposedly the best in the area), I've made it a quest to bake the perfect pie right in my very own oven. I may not have a woodburning one, but I've got a Thermador and a pizza stone, so shake whatcha mama gave ya.
Herb and Dori got me hooked on this little Italian deli that hides in Capital City here in DC. It's like a little bit of Little Italy. I was always so bummed that Washington didn't have a Little Italy like NY and Philly. So finding this market was such a blessing, it's truly a gem. A. Litteri is on Morse Street in the middle of meatpackers and wholesale food suppliers in a very ugly part of the city. A very ugly part that happens to be a 5 minute drive from my house. It's a tiny little shop that packs a good punch. The walls are stacked to the ceiling with imported goods from Italy that can't be found anywhere else in the city and more pasta and Cento products than you can name. At the back of the maze of aisles, is the meat and cheese counter. You can get true Italian subs (rated the best in the city and judging from the lines at lunch, I'd believe it) and the best cheeses and sausages. I've never actually ordered baccala, but it's so fabulously Italian, I'll tout that too. Be prepared to be patient, these guys know how good you're going to get it, so they have no problem making you wait.
After trying the pizza dough at Vace (not my favourite Italian market in the city), I decided it didn't have enough salt. I tried Litteri's and was much more satisfied. For some reason, making dough scares me immensely. If yeast is involved, I'm immediately terrified. I should really try to get over that.
I found that the house marinara sauce at Litteri's was light and refreshing, something I dig in my pizza sauces, and saved me the hassle of fast forwarding my Godfather DVD until I got to the part where Clemenza gives up the secret to his sauce. I love a good margarita pizza, so I started out simple with mozzarella and fresh basil for garnish.
It's a total work in progress, and I think I'm on my way to finding the perfect recipe for me. My biggest obstacle so far is the thinness of the crust. Sometimes, I can get it to an acceptable width, but it's hardly ever consistent and it's hardly ever round. I heard a true Neapolitan pie isn't round anyway, so there.